When Quiet Quitting Is Worse Than the Real Thing 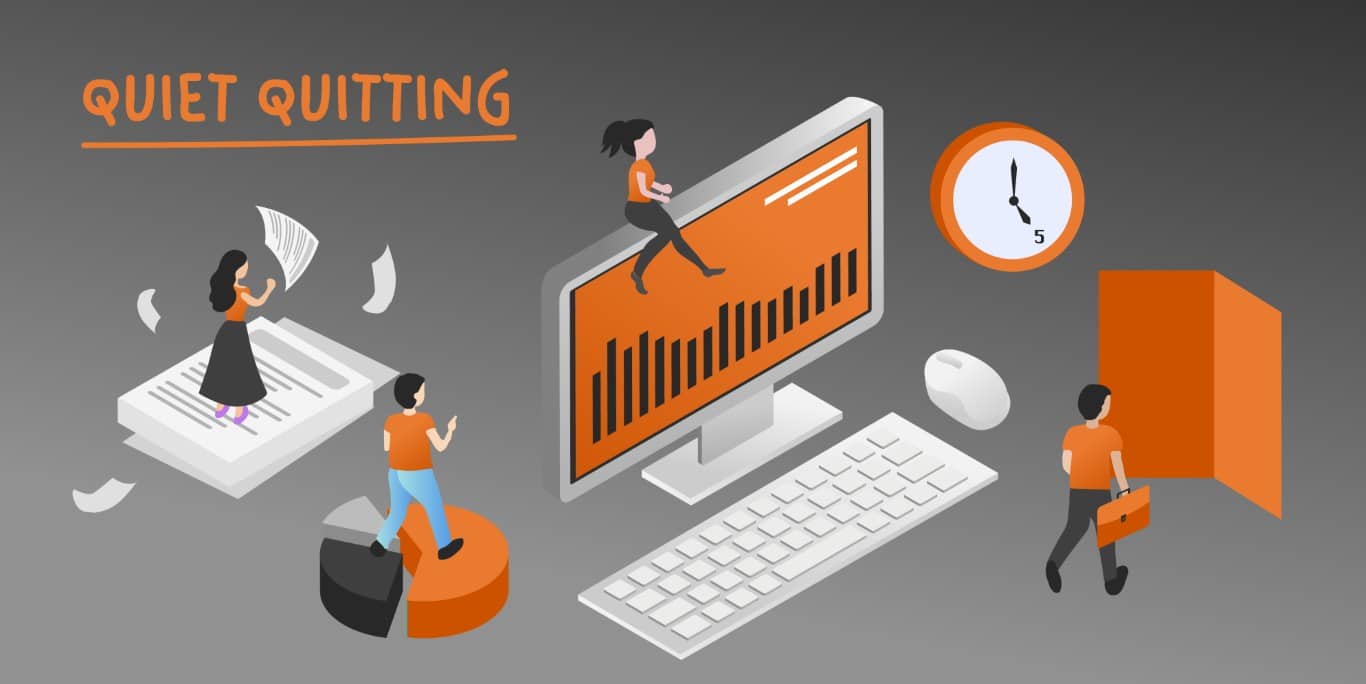 Is "Quiet quitting" taking over your organization and leading to a lack of productivity? Learn more about this recent workforce trend, while looking at possible solutions for the same.

When Quiet Quitting Is Worse Than the Real Thing

‘Quiet Quitting’ is enjoying the spotlight at this moment. It is trending big in the market and has become one of the primary concerns of employers today. But before we proceed any further, let me introduce you to a friend of mine.

Say ‘Hi’ to Gaurav. Gaurav works in a marketing agency. He works from 10 am to 6 pm and returns home. After returning home, he does not take work calls, does not respond to work emails, and also refuses to do any pending work at home.

And, I know many other contemporaries of Gaurav who are just like him.

And, this is exactly what ‘Quiet Quitting’ is all about. It is like a willful retreat from workplace duties after a certain time and becoming less psychologically invested in work.

According to the Los Angeles Times, the term ‘Quiet Quitting’ was introduced by a Nashville-based corporate recruiter turned career coach Bryan Creely with his TikTok video on March 4, 2022. It is interesting to analyze how a TikTok trend has turned out to be so eminent that employers just can’t ignore the concern also, it has encouraged discussions in leading magazines and journals like the Harvard Business Journal, Wall Street Journal, and many more. While you must have heard about the ‘great resignation’ where employees are voluntarily resigning from their jobs, this trend named ‘quiet quitting’ is culminating in a twin brother of the ‘great resignation’, where employees, particularly the GenZers are refusing to engage with their work and distancing themselves.

What is ‘Quiet Quitting’?

"Quiet quitting" means rejecting the idea that work must take over an individual's life and that employees ought to go beyond and above the scope of their job descriptions. According to Metro, this can manifest itself in a variety of ways, such as declining projects based on interest, refusing to respond to work messages after hours, or just feeling less invested in the role.

It means doing the bare minimum of one's job and investing no more time, effort, or enthusiasm than is absolutely necessary. As such, it is somewhat misleading, because the employee does not actually leave their position and continues to be paid.

Quiet Quitting has taken shape as a popular phenomenon in the US 2022, thanks to social media. But some people have observed how common it is while many have even questioned it's brand-new nature.

It was observed by Professors Anthony C. Klotz and Mark C. Bolino in a September 2022 Harvard Business Review article attempted to explain the phenomenon that, “Quiet quitters continue to fulfill their primary responsibilities, but they’re less willing to engage in activities known as citizenship behaviors: no more staying late, showing up early, or attending non-mandatory meetings.”

Managers' reactions to the occurrence have been varied. Some have remained patient, partially so because current tight scenario of the labour market makes it challenging to replace quiet quitters anytime soon. Others have reacted by firing employees they believe are giving up off, be it quietly or loudly. Indeed, "quiet firing" is now a buzzword in its own right, typically described as trying to make a job so uninteresting that the worker intends to resign.

What is the Root Cause of Quiet Quitting?

Management Professor James Detert, who has studied worker behavior, believes that issues like the ‘great resignation’ or ‘quiet quitting’ have one common inherent cause - “Organizational Silence”. Workplace courage is the primary focus of his research and he along with his colleagues has found it to be prevalent in almost every American workplace. Workplace courage refers to how often workers speak up when they see an issue or have suggestions for improvements and innovations.

An online survey that Detert has been conducting since 2018 reveals that roughly one-third of workers speak up to their bosses or other higher authority members about any illegal, unethical, hurtful, or otherwise inappropriate behavior. When the questions involve speaking up about less sensitive issues, such as operational issues or ways to improve the organization, the frequency isn't much higher. Even when the other person is a colleague with no power over them, the numbers are similar.

In his 2021 book named ‘Choosing Courage, Detert describes four common fears that prevent people from voicing their opinion, speaking up, or being completely honest:

People often fear that pushing their bosses too much about flexible work hours, the place to work from, or anything else, may lead to consequences like getting fired, being devoid of promotion, and so on.

They feel that being too frank with colleagues and confronting them about their missed deadlines or any offensive behavior of theirs may subject them to social exclusion.

If something put forward by them doesn’t get accepted, they may start doubting themselves.

They feel if they confront a customer or coworker who is breaking a policy or speaking inappropriately, they may be punched or threatened with a weapon.

Why is ‘Quiet Quitting’ More Relevant Today Than Before?

While organizational silence may be a real troublemaker for both the employers and employees and can be one of the primary fuelers of ‘Quiet Quitting’, there are a plethora of other factors that come into play to make the concept more relevant and most importantly important, in today’s corporate climate.

Many people have joined a global culture of overwork in the last 20 years, with unpaid labor turning out to be a silent, obvious part of many jobs. Following multiple recessions and a global pandemic, millennials and generation z, in particular, do not always enjoy the same employment opportunities and financial security as their parents.

Many young professionals who expected a relatively straightforward career path have continued to struggle with precarious contracts, job insecurity, and attempting to get on the housing ladder. Some people work long hours and go above and beyond at work in order to get promotions and bonuses, but they still struggle.

Perhaps in response to this dissatisfaction, a recent Deloitte study discovered that youngsters are increasingly and deliberately seeking flexibility and purpose at work, and desire a work-life balance. Nowadays, several young professionals are shunning the live-to-work lifestyle and continuing to work but refusing to let work control them.

‘Quiet Quitting’ is also more relevant today because of more awareness of mental health. Studies have revealed that a perfect work-life balance is related to mental health in a variety of jobs. It can also assist one in distancing your self-worth from your work.

Workplace-perceived failures, such as not receiving a promotion or recognition for your accomplishments, can become internalized as personal failures. This can cause anxiety, as you wonder how you can improve your performance. People frequently respond by doing even more work, perpetuating the vicious cycle of overwork and low self-esteem.

The extreme workload can also invite burnout which everyone is aware of. Burnout was officially recognized by the World Health Organization in 2019 as a work-related phenomenon characterized by feelings of depletion, exhaustion, cynicism, mental distance from work, and poor performance. Overwork causes burnout, which may inflict long-term physical, mental, and emotional health consequences.

All these factors together, are the reason why ‘Quiet Quitting’ is picking up more steam today than before.

How Must Employers Respond?

Some places of work are allowing more remote work, greater flexibility, and new working models. Many organizations, however, have not addressed the issue of well-being, and the basic needs of the employees in the workplace. Much of this relates to social interaction, psychological safety, and the office's social cohesion, which fosters a sense of belonging. But how to kick off a sense of belonging among the employees?

Well, those employers who are making an effort to encourage informal conversations are on the right track. It is essential to create and maintain a workplace culture that keeps employees engaged and motivated toward common goals. It is an excellent opportunity to re-recruit employees and communicates what constitutes a mutually beneficial arrangement in order to foster a positive attitude toward work. This occurs through more casual interactions with individuals and not just elaborate corporate events. It is beneficial to include information on how to create more deliberate opportunities for people to come together to collaborate, innovate, or socialize.

Firstly, what needs to be mentioned is the fact that both sides, the employers and the employees are at fault and are responsible for ‘Quiet Quitting’. Whereas companies and other organizations do not give a voice to their workers, workers have also refrained from speaking up, be it out of fear or ignorance.

Corporate, nonprofit, and government leaders should do more to encourage employees to speak up by consistently soliciting their feedback and rewarding them rather than punishing them for it. Employees will indeed see less need for a union if leaders do more to establish these conditions.

Workers who are afraid of repercussions can learn skills to help them speak up effectively and minimize the negative consequences of doing so. Sometimes simply changing the framing makes a big difference, like asking managers to address a safety concern because it's an emergency.

None of the aforementioned steps are easy. There has to be a more courageous and bold plan of action put forward by the leaders. Finding ways to encourage workers to speak up about issues such as safety, misconduct, and performance is critical and crucial because what happens in these situations shapes the places where people spend the majority of their waking hours and determines whether they even want to be there.

Send Us An Email

Speak to us and find out why some of the world's biggest companies choose Personifwy to engage & enable workforce.